Minecraft Dungeons: Everything we know so far 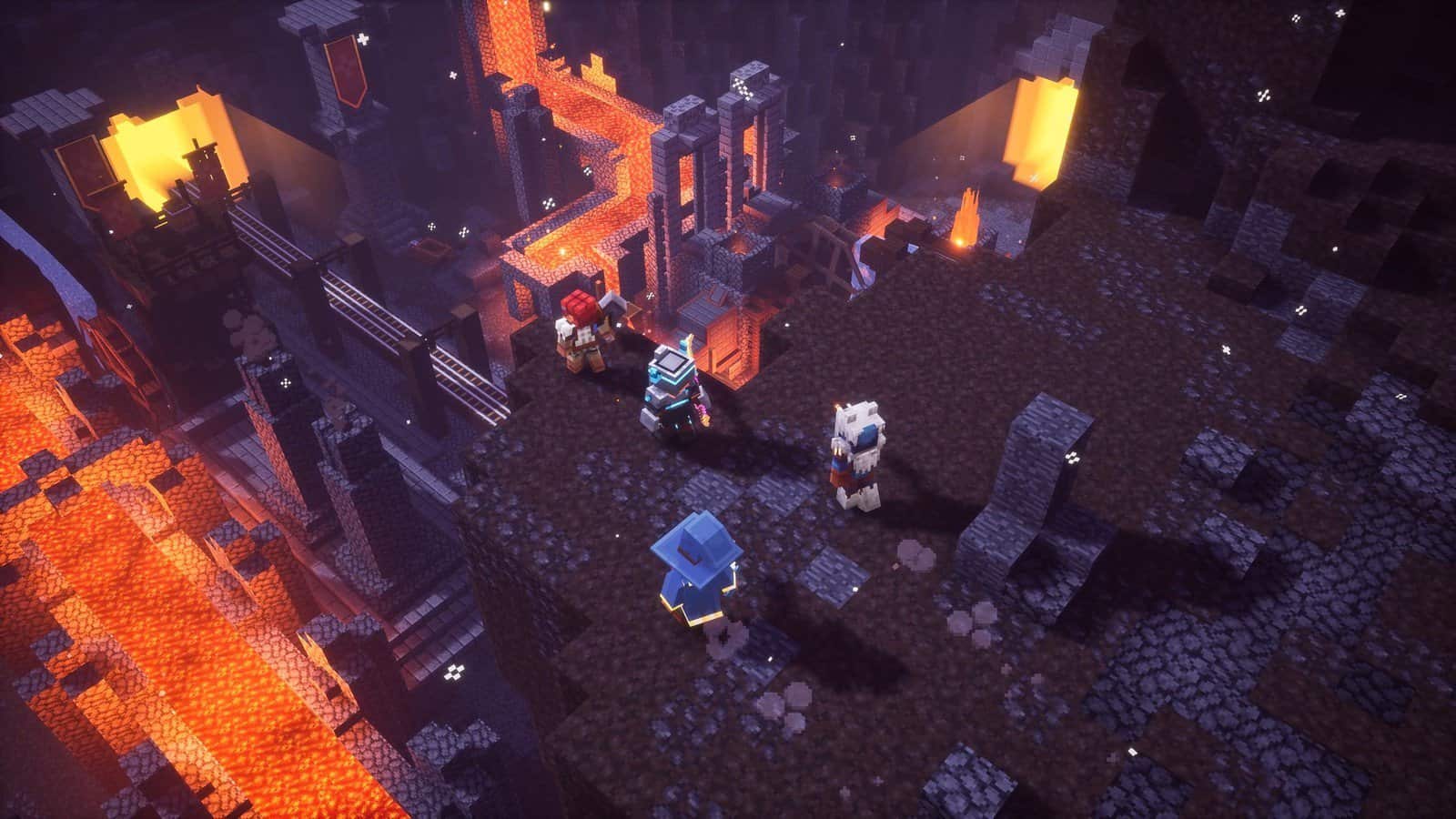 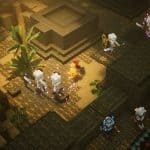 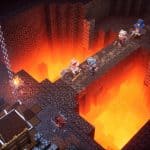 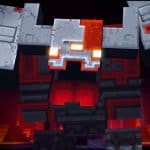 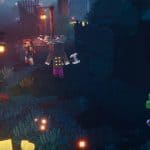 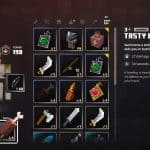 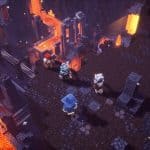 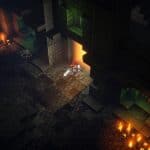 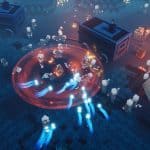 Minecraft Dungeons: Everything we know so far

We learned a ton of stuff about the game while we were at the show, including its planned Spring 2020 launch window.

We’ve compiled all the biggest questions and answers for things we know so far into this article. If you have more questions, be sure to drop them in the comments and we’ll try and get them answered in the near future. 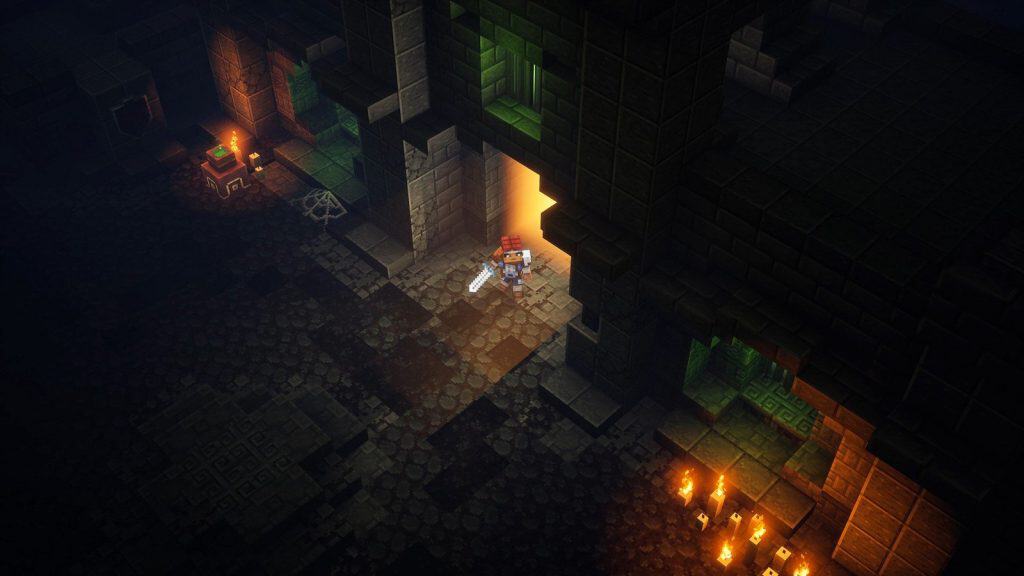 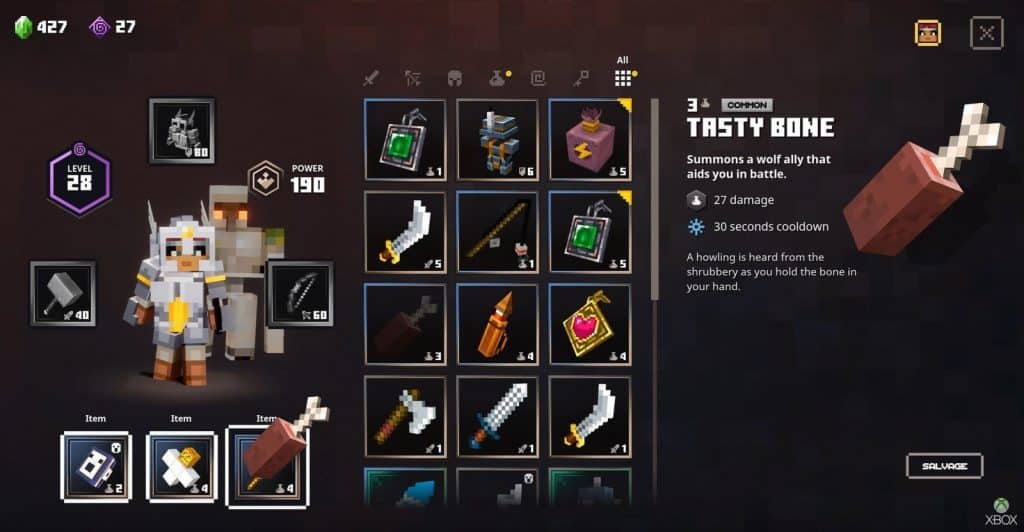 Classes and progression in Minecraft Dungeons
Minecraft Dungeons doesn’t have a traditional class-based structure. Instead, you will build your playstyle based on what items, enchants, armor, and weapons you use.

For example, if you want to play a defensive “warrior” type class, you’ll likely want to pick up heavy plate armor and wield defensive artifacts and traits. Someone who prefers using spells might prefer using lighter armor that reduces your cooldown speeds so you can use abilities more frequently, instead of smashing things with a hammer or sword. You’ll also be able to play an agile archer, focusing your abilities on your ranged weapon slot, which can include bows and crossbows.

On top of itemization, you will also be able to enchant gear with special effects. One enchant might produce a chain lightning spell, which can also be upgraded through the game’s leveling system.

Mojang told us that there are around twenty different types of enchants for your melee weapon slot, another 20 for your ranged weapon slot, and a roughly similar number of unique artifacts that produce special abilities. Some of the examples we’ve seen so far include a horn that knocks back enemies in an area, a firework rocket that you can attach to your bow to create explosions, and a spell that looks like a giant purple lazer beam. All of those artifacts can be modded further. One enchant we got allowed us to shoot two firework rockets instead of one. 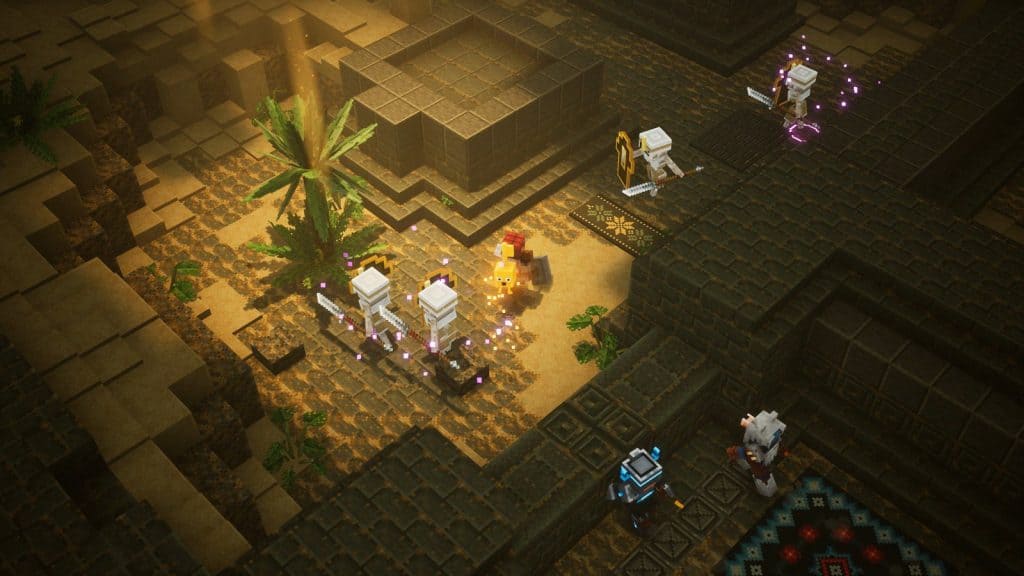 The central antagonist is the Arch Illager, who is kidnapping innocent villagers and sacking towns, much like the Illager behavior in the base Minecraft game. You’re the hero that is supposed to bring an end to his dark reign. Beyond the overarching story, each level has a specific objective, which might be to defeat one of the game’s new boss monsters, or rescue a specific NPC.

Does Minecraft Dungeons have an end game?
After you complete the main story, Minecraft Dungeons’ difficulty tiers will unlock, giving access to more procedurally-generated dungeons with increasingly difficult enemies and traps, with even better loot. Mojang doesn’t want Minecraft Dungeons end game to feel “grindy,” instead it will focus on the fun of battling giant monsters and getting awesome loot.

There will be a central camp where you decide which missions to undertake, and the game will alert you to the difficulty based on your Power level, which is effectively your gear score. More difficult dungeons will provide better loot. 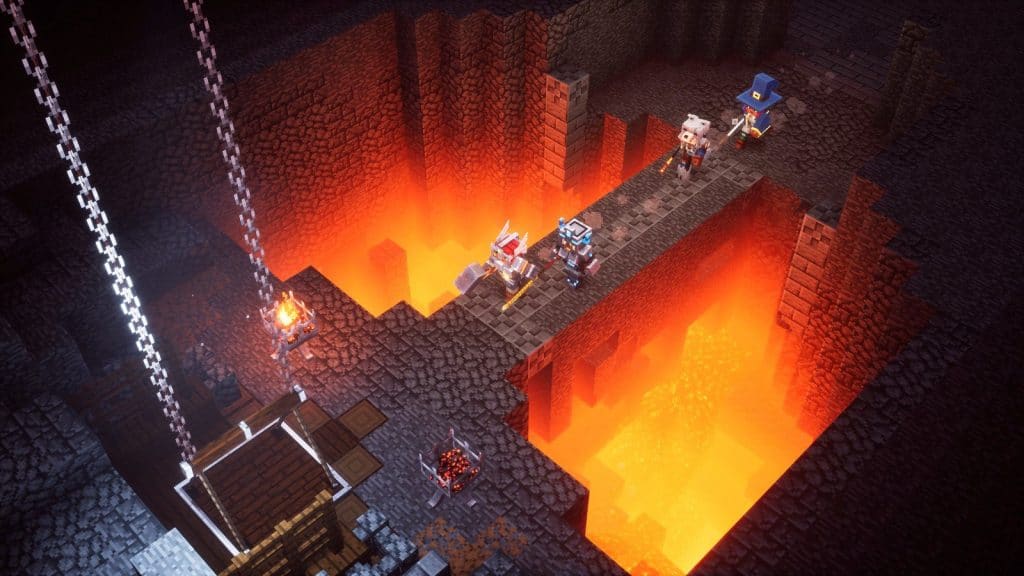 How does loot work in Minecraft Dungeons?
Loot is randomly generated in Dungeons, along with its maps. There may be chests, bosses may drop unique weapons, and there may be light puzzles to solve for additional loot, off the beaten path. Each item comes with a power level, which accumulates into a gear score for your character.

Some of the weapons we know about so far include swords, bows, crossbows, two-handed weapons like hammers, shields, pickaxes, and you can even use a fishing rod to hook mobs and stun them. 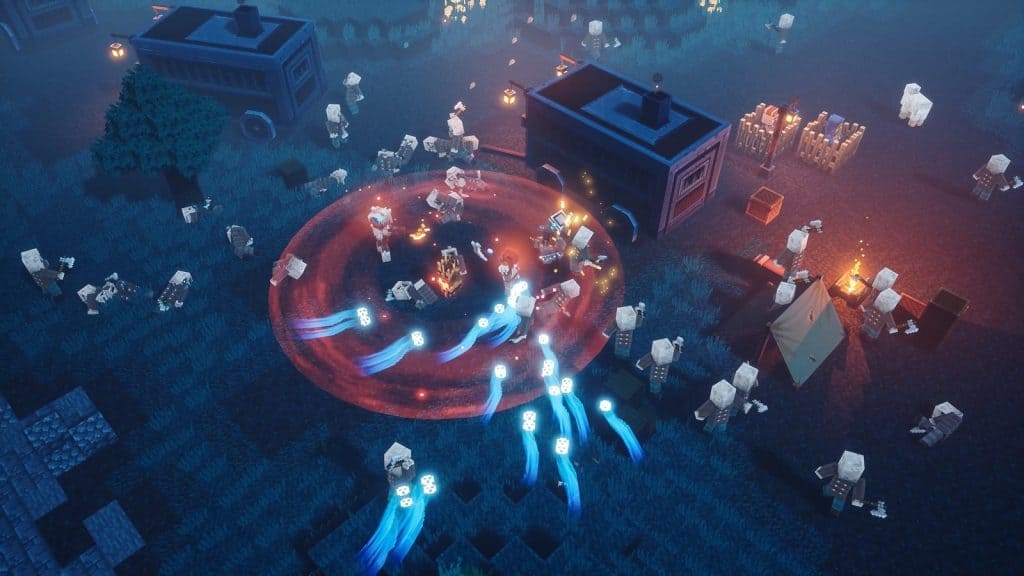 What mobs are there in Minecraft Dungeons?
Minecraft Dungeons seems to have every mob that we know and loathe from the base game, including Creepers, Skeletons, Zombies, Spiders, and so on. Some mobs, like the Endermen, have taken on more of a “boss” role, turning the screen fuzzy with psionic power when they show up.

Beyond the usual creatures, Minecraft Dungeons will have a range of new enemies to battle, including a Necromancer which can resurrect defeated mobs, and a Wraith which can set huge areas of the map on fire, forcing you to dodge and stay on your toes.

We asked Mojang is the Ender Dragon might show up, and they basically told us with a wink and a nudge “wait and see.” 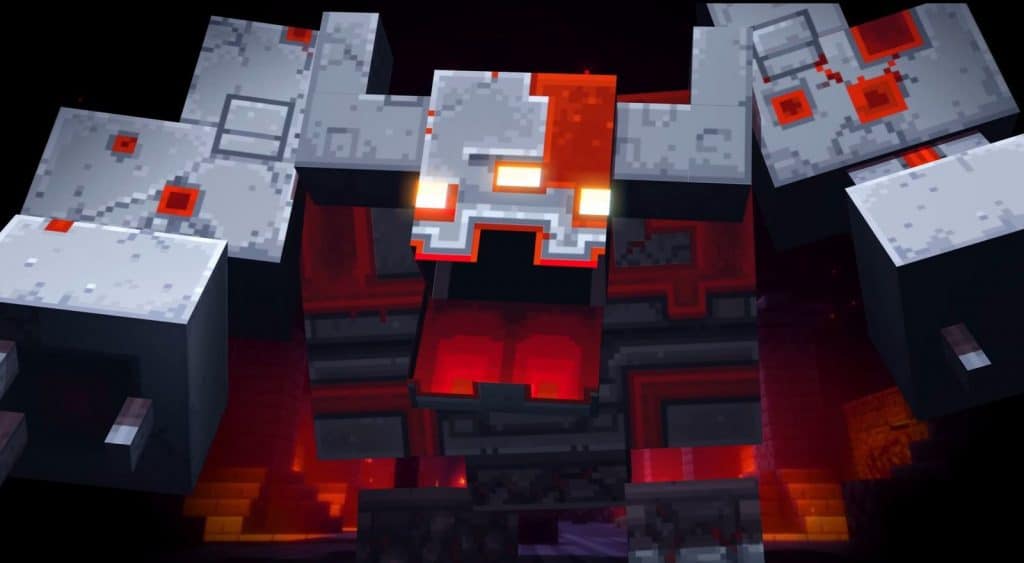 How much does Minecraft Dungeons cost?
Minecraft Dungeons will have two editions. The base game costs just $20, but a $30 special “Hero” edition will come with two DLCs, in what was described to us as a mini-season pass. Mojang plans to release further DLC, both free and premium if the game takes off. It will also arrive as part of the Xbox Game Pass subscription. 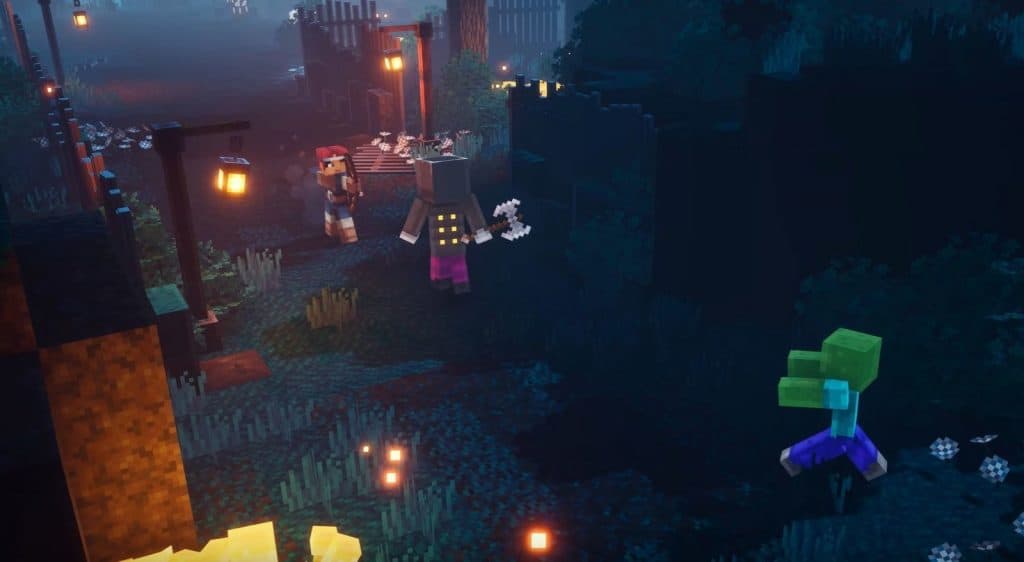 Minecraft Dungeons seems awesome!
In our hands-on with Minecraft Dungeons, we were incredibly impressed with the way the game felt. Building on the Unreal Engine seemed like the right decision, as the game has truly stunning lighting and physics, that gives combat a really satisfying feel, very close to the likes of Diablo III. New mobs like the Wraith, Necromancer, and the impossibly cute Key Golem should make exploration feel fresh for even the most hardcore Minecraft fans, and the procedural nature of the randomly-generated maps should help stave off feelings of repetition.

Even if you’re not a fan of Minecraft itself, Dungeons looks like it’s shaping up to be a rock-solid action RPG entry to the wider Minecraft universe, and frankly, we can’t wait.